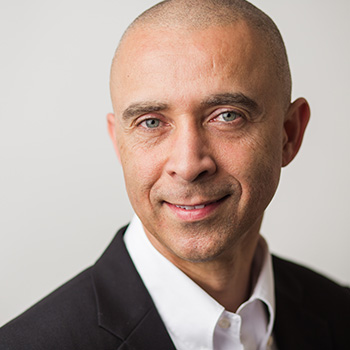 David Roberts is considered one of the world’s leading experts on business disruption, exponential technology and exponential leadership. His passion is to help global leaders transform and develop new intentions for global good. He was educated as a Harvard MBA, holds a BS in Computer Science & Engineering from MIT and majored in Artificial Intelligence and Bio-Computer Engineering.

He began his career as a military officer and decorated Special Agent. He was the Distinguished Graduate of the Special Operations Training Course and served in multiple roles as a Career Officer in the Executive Branch of the US. Government. He led the development of some of the most complex systems ever built to include multi-billion-dollar, revolutionary, secret spacecraft and a founder of the US Drone Program where he later served as a Mission Operations Commander. He served as a senior executive or military officer in 5 National Agencies and as Special Assistant to the Director of the largest information program in the US budget.

Roberts also served as Vice President of Singularity University, two-time director of their Graduate Studies Program, Faculty for ten years, and the Distinguished Faculty member for five. His award-winning high-tech ventures have received over $100 million dollars in funding from Silicon Valley’s top investors to include Kleiner Perkins, Vinod Khosla, Cisco, Oracle, Accenture and In-Q-Tel. He is Chairman of the world’s leading Quantum Computing software company, 1Qbit. He was the Founder and President of FireDrop and Zaplet, which merged with Metric Stream, also serving in all three companies as Board Director.

Additionally, Roberts is Founder and CEO of GEDI Training, a new kind of organization that is transforming education by uniquely training leaders for extraordinary, lifetime, human performance through character training and exhilarating global experiences from elite combat warriors, human performance experts and renowned physicians. He is the Founder of Exponential Leadership, an organization dedicated to transforming global leadership potential through courage, compassion and integrity. He is the founder of the Global Inspirational Goals, a proposal made to the United Nations to adopt, in addition to the Sustainable Development Goals, global goals that inspire the best of human potential so that we are not just focused on solving global problems.

Roberts was an Investment Banker in the Mergers and Acquisitions Group at Goldman Sachs Headquarters. Harvard, Stanford and Berkeley’s Business schools have written and taught case studies on his leadership, management and decision-making. He has been pictured on the cover of the Wall Street Journal and written about in USA Today, The New York Times, Business Week, Fortune Magazine, CNN and others. His start-ups have received multiple awards to include Top 50 Private Companies in the World, Red Herring Top 100 Private Companies in the World, USA Today’s Tech Reviews Best Picks, Internet World’s Net Rising Stars, Red Herring’s Catch, Internet Outlook’s Investors Choice Award, Enterprise Outlook Investors Choice, Best of the Web from PC World.

His fascination with technology began in the fourth grade after building a hovercraft (early drone) to carry his sister to the bus stop, powered by what was formerly his mother’s vacuum cleaner and fortunately limited by the length of an electric power cord.